GUEST POST — Beauty in All Things by Sean Forester 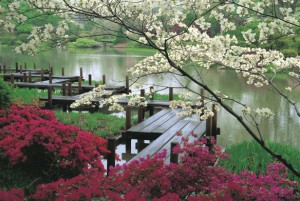 In the Edo period (1603-1867), Japanese culture achieved a rare level of refinement. This summer in Toronto we will explore how beauty infused nearly every aspect of life, and everything people saw, touched, smelled, and tasted: Zen gardens, tea ceremony, flower arrangement, poetry, calligraphy, woodblock prints, and dress (kimonos and netsuke). Transience and mortality were seen as an integral part of beauty.

Together we will study these artistic values as well as many others that make Japanese art what it is, such as respect for nature, the use of space and asymmetry, and humor and playfulness. We also have the wonderful treat of a tea ceremony Yumiko Katsuya, a Japanese Canadian master potter, as part of the seminar. 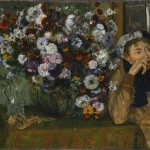 When Japanese culture made it to Europe, it had a profound influence on artists such as Van Gogh, Degas, and Whistler. The arts of Japan resonated as deeply for them as they still do for us today, and their admiration is evident from reactions such as this one from Van Gogh: “I envy the Japanese artists for the incredible neat clarity which all their works have. It is never boring, and you never get the impression that they work in a hurry. It is as simple as breathing; they draw a figure with a couple of strokes with such an unfailing easiness as if it were as easy as buttoning one’s waist-coat.”

As a classical painter, I am particularly interested in how these artists incorporated Japanese aesthetics and techniques into their own work, each in his own way to realize his own artistic vision. Empty foregrounds, flat surfaces of paint, and simplified forms were just a few of the elements of Edo painting and printmaking that fascinated Western artists.

Here are some fun books to read (some with beautiful pictures to admire) that give a flavor of the richness of Japanese art and culture:

The Hare with Amber Eyes: A Hidden Inheritance by Edmund de Waal
The Lady and the Monk: Four Seasons in Kyoto by Pico Iyer
The Art of the Japanese Garden by Michiko and David Young
The Empty Mirror: Experiences in a Japanese Zen Monastery by Janwillem Van de Wetering
To Shine One Corner of the World: Moments with Shunry Suzuki

Please join me in a discovery of Japanese art and culture. For more information on our Toronto Pursuits seminar, Japan: The Cult of Beauty, click here.

Sean Forester, a classical oil painter, has led for Classical Pursuits for several years. He studied at St. John’s College and at Cambridge University as a Rotary scholar. Sean has long admired Japanese culture and is excited to explore it more deeply in Toronto. He will help us see Japanese art through a Western artist’s eyes.