Nine Symphonies That Changed the World

by Rick Phillips, leader of our 2020 Toronto Pursuits seminar on Beethoven

When it comes to Beethoven (1770–1827), his 200th birthday in 1970 was suitably lauded, with much less fanfare in 1977 for the 150th anniversary of his death. But for 2020, Beethoven’s 250th birthday, expect a multitude of concerts, recordings, books, articles, lectures, panel discussions—and a Classical Pursuits seminar: The Beethoven Symphonies: Aging or Ageless?

Today, the nine symphonies by Beethoven are well-known and often heard. As well as in concert halls, we hear snippets of them in radio and television ads, computer games, doctors’ offices and shopping malls. Pop musicians often borrow or sample themes, updating the rhythms and energy to better conform to contemporary tastes and markets.

But why? What is it about Beethoven and his symphonies that has created this lasting legacy? After all, he composed only nine, where between them, the earlier composers Haydn and Mozart created almost 150 symphonies!

The symphony emerged as the large-scale orchestral form we recognize today in the first half of the 18th century, as the dying embers of the Baroque period gave way to the Classical period. But it was largely created and intended as a form of entertainment for the upper classes.

By the end of the 18th century, with the huge social and political changes that came out of the French Revolution, (not to mention the technological innovations of the Industrial Revolution) composers began to turn their sites to target the burgeoning middle class. The symphony now moved from aristocratic entertainment to a true art form that presented or reflected the concepts and ideals of a large segment of the population. Timing is everything, as they say, and Beethoven, as a son of the French Revolution, was perfectly suited to carry the mantel. 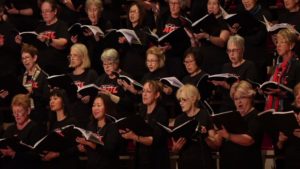 Although his first two symphonies were composed with Haydn and Mozart as models, already the unique and original stamp of Beethoven was present. In the symphonies Nos. 3-8, he continued to experiment with the forms, structure, instrumentation, size, scope and message of the symphony, culminating in the Symphony No. 9 that includes a text, vocal soloists and a full chorus in the finale, extolling the ideals of freedom, joy and human fulfillment on earth.

The effect of the Beethoven symphonies on the course of music is incalculable. There was not a composer of symphonies after him who was not influenced. Johannes Brahms (1833–1897), viewed as the heir to the Beethoven throne, postponed his first symphony until he was well into his forties, terrified of the comparisons to Beethoven’s that would naturally be made. When Brahms finally mustered the courage, made the plunge and released his Symphony No. 1, it was cruelly labelled “Beethoven’s Tenth.” Today, the Beethoven “nine” are revered as a kind of special heritage of Western and world culture, right up there with the plays of Shakespeare and the sculpture of Michelangelo. And they continue to influence symphonic composers now, in the second decade of the 21st century, over 200 years later. Why?

In my 2020 Toronto Pursuits seminar The Beethoven Symphonies: Aging or Ageless? we will search for reasons for the lasting legacy of the Beethoven symphonies. What have they conveyed to us over the past two centuries, and why and how do they remain important today? We’ll listen to the Beethoven “nine” from classic recordings by a variety of orchestras and conductors, discussing and searching for answers. As classical music seems to be diminishing in our hectic lives today, will the Beethoven symphonic legacy continue with future generations? I hope you’ll join me in Toronto in July 2020 for what promises to be a fascinating week of great music and discovery.

“Symphonies are the best representation of my true self. I always seem to hear within me the sounds of a great orchestra.”