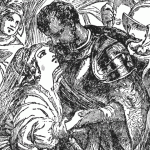 For insights into the great mysteries of life such as the workings of love and death, many of us turn to the masterpieces of music and literature. The tale of Othello, a dark-skinned hero who falls from moral majesty to savagery, told in an Elizabethan tragedy and a Romantic opera, stirs deep feelings of love and loss in me. This summer I’m hoping to gain new insights into these favourites, as together, we re-discover Shakespeare’s Othello and Verdi’s Otello in Noble Moor to Savage Beast: Othello and Otello at Toronto Pursuits 2015.

As I re-visit the tragedy and listen to the opera, I’m struck by something obvious and surprising at the same time: both Shakespeare and Verdi were writing for fiercely racist societies, where a black man’s marriage to a white Venetian aristocrat would be seen as something repugnant. Yet both artists transcended that pervasive racism to generate tremendous empathy for Othello/Otello.

In both works, Othello’s blackness and Desdemona’s whiteness are central to the story. This is what makes Othello a vulnerable outsider. He is a lonely character in both works—not only because of his skin colour, but also because in his heroic and moral superiority, he towers above those around him.

For Shakespeare, to create a Moor worthy of Elizabethan empathy was an enormous feat; Elizabethan society would see a Moor as bestial and volatile. But despite the extremely lewd language of the play, Othello is a moral and rational being, with great dignity. He starts out as the virtuous and eloquent “noble Moor.” Much is made of the spiritual quality of his love for Desdemona. His suffering and downfall follow inevitably from his noble character. His killing of Desdemona is almost an act of moral obligation—a priestly sacrifice:

Why, anything:
An honourable murderer, if you will;
For naught did I in hate, but all in honour. (V.ii.295)

Shakespeare’s Desdemona is also human: she is a spirited character, even willful towards her father in her determination to marry Othello. And his Iago acts from real motives. 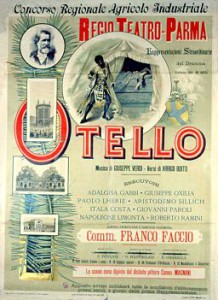 Do we have to compare the Elizabethan tragedy and the Romantic opera? No, each stands on its own. Yet an examination of the two together is revealing. Verdi’s Otello is generally considered the most successful opera based on a Shakespearean tragedy. The great Italian succeeded in making Otello his own, without being overwhelmed by the great Elizabethan—no minor feat!

Verdi’s (and librettist Boito’s) Romantic Moor is a war hero of great stature, a man of action, direct and driven. His first appearance in the opera is triumphant; his first word is Esultate! (Rejoice!)

The opera has melodramatic elements. Iago is pure, satanical evil. Desdemona is pure good, saintly, angelic, and Otello is the battleground where these forces collide. With the poison of jealousy, injected by Iago, the magnificent hero becomes a maniacal savage. It is the music that raises the work to the level of a tragedy.

Otello came late in Verdi’s career. It’s different from earlier Verdi operas; it doesn’t have formal arias and catchy ensemble numbers. The music has a continuous, indivisible texture, with a lyrical line. It was a risk that Verdi took at the time, and the audiences rose to the challenge.

We also hope to meet that challenge this summer, with pleasure and perhaps with awe.