On the Road with Ann — Nature on Display

Written by Melanie Blake on Sep 1, 2014 in Ann's Musings, Convivium, Journal, On the Road with Ann 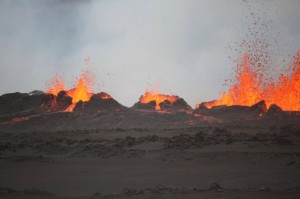 You are, no doubt, hearing more about Bardabunga in Canada and the U.S. than we are here. Our climatic concerns have been more mundane – yesterday we had everything, starting with rain and wind. For good reason, Icelanders do not use umbrellas. It cleared up in the afternoon and the sun eventually came out. The sky is ever-changing and dramatic, much as it is in Holland. Speaking of comparisons, the city of Reykjavik is strongly reminiscent of St. John’s, Newfoundland, with its position on the sea and its rocky, hilly terrain. The built environment features brightly coloured houses and other buildings on a very human scale. Nothing grand or pretentious.

Yesterday we went to the national museum to learn about this tiny country’s history, from early settlement of an empty and barren volcanic island by the Vikings to the near present. Only five families ran the place, and although feuding was common, early on they developed laws and a parliament to keep conflicts from getting out of hand.

Next we have a walk of sites from Laxness’s The Fish Can Sing, which we will discuss this morning.