CLASSICAL TRIVIA! Will the Real Anna K. Please Stand Up?

Written by Melanie Blake on Jan 5, 2015 in Classical Trivia!, Convivium 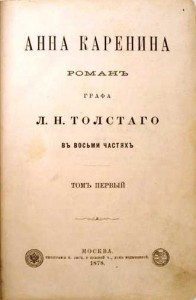 How impoverished we would be with no access to literature written in languages unknown to us. Let us give thanks to literary translators. But their challenges are colossal. How do you translate wordplay or a metaphor? What about culturally-specific landmarks or expressions that may be unknown to a foreign audience? Should you translate names or leave them in the original language? For a translator working with literature, the question isn’t only what to say, it’s also how to say it. Two new translations of Leo Tolstoy’s masterful epic novel, Anna Karenina, prompted this recent consideration of literary translation in the New York Times.  Imagine if we had not access to one of the most influential and memorable characters in world literature. But the question lingers … how do we know if we have been introduced to the real Anna?